Getting to Know "Dead by Dawn" 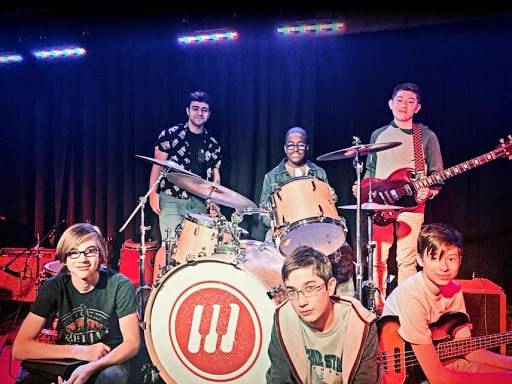 Let's learn more about Dead by Dawn from their answers to our interview questions below:

How did your band come up with that name? Tell the story.

How long have you been playing your instrument?

If you could magically convince one famous musician, living or dead, to join your band, who would it be?

Why is it so important for a musician to perform and collaborate with other musicians (as opposed to always just practicing alone)?

Nate Singer: It's good to play with people that don't share the same taste in music.

Nathan Perdieu: If I never played with people who played Jazz. I would have never known how much I hated Jazz.

What is something you've learned from another musician in your band?

Julian: Listening to other ideas when it comes to Originals. I've always been a loner. It's a great experience.

Describe the most excellent, memorable moment you've ever had with your band.

Julian: Being in my first Grand Showcase in August. Being able to play in front of a big audience made me feel free.

What do you guys do that's special – that you think sets you apart from all the Music House bands?

Julian: We can argue about which song to play all day, but in the end we listen and compromise.

Imagine one of your friends takes private lessons somewhere (not at Music House). They tell you that they love music and wish they were as good as you, but they're getting bored with lessons and might quit. What advice would you give them?

Julian: I would suggest joining Music House. It is an escape to explore your musical interest and have the opportunity to join a band.

As we've learned from their answers, what sets this band apart is their ability to compromise with each other, no matter how different their tastes in music might be. This opens up a whole world of possibilities for creating excellent music.

However, one thing that they will never compromise on is giving the best performance possible!

You can meet Dead by Dawn at our upcoming Battle of the Bands, a Music House exclusive event!