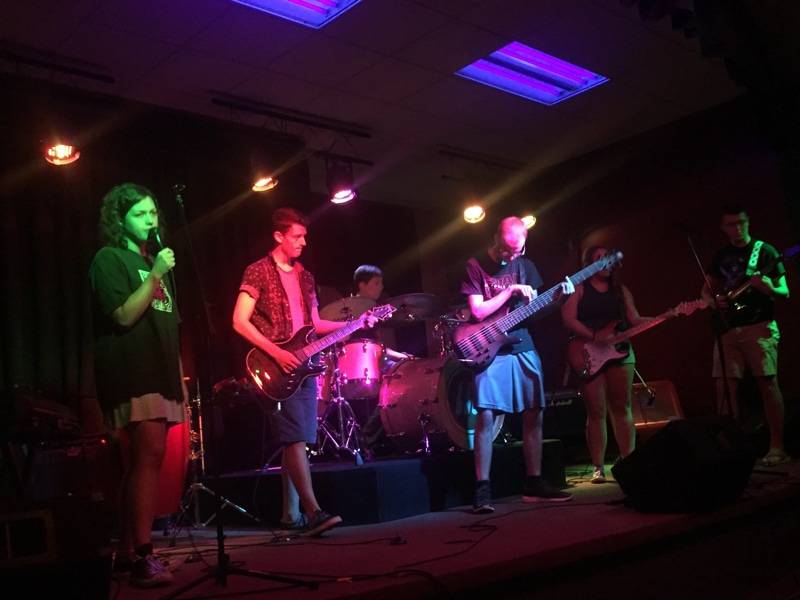 It's challenging to describe a band accurately. It's even harder for a band to describe itself without instantly feeling like they're pigeonholing themselves. After struggling to put their fingers on it, Music House band workshop Chovette unanimously (well, almost) described themselves as "power punk." Their workshop instructor, Brock Schwien, agreed and added his two cents: "Powerful, but intricate."

Why the name, Chovette?
It's a curious--yet memorable--band name that definitely raises some questions. Sydney Van Ophem, guitarist and back up vocalist, is the first to explain. She takes French in school. The word chouette is French slang for "cool."

So, who is Chovette?
From my perspective, Chovette is a little genre-bending, powerful, and challenging to define. Watching them on stage only solidifies this fact, showcasing their confidence in what they've created together. Talking to all six band members at once is a whirlwind, much like their wall of sound they produce.

Musical Influences
One of the most over-asked questions when interviewing a band is, no doubt, "what are your musical influences?" Because Chovette is made up of band members with very different tastes, I just couldn't resist.

So what do you listen to, then?

Any Kansas City music you're digging at the moment?

Chovette's time together as a band
After debate (many of the band members have played together for upwards of five years), we ended up settling on Chovette, as we know it,  being about one year old. Whether that estimate is a few months off or not, an annual mark feels solid. Chovette has had ample time to develop a unique sound as a diverse group with varying musical influences.

In that year, have you had any cool accomplishments?

What about challenges? What happens when you disagree?

Future plans for Chovette
With two of its members leaving for college this fall, the future of Chovette is unclear. Each of Chovette's members have spent a good chunk of time learning and fine-tuning their craft at Music House. Whether Chovette sticks together through the next year or not, all members agree that it's been an eye-opening experience.

One thing is for sure, this Focus Workshop at Music House will live on through band member and style changes . For more info. on how to get involved in a band workshop of your own, click here.

What about individual future plans?