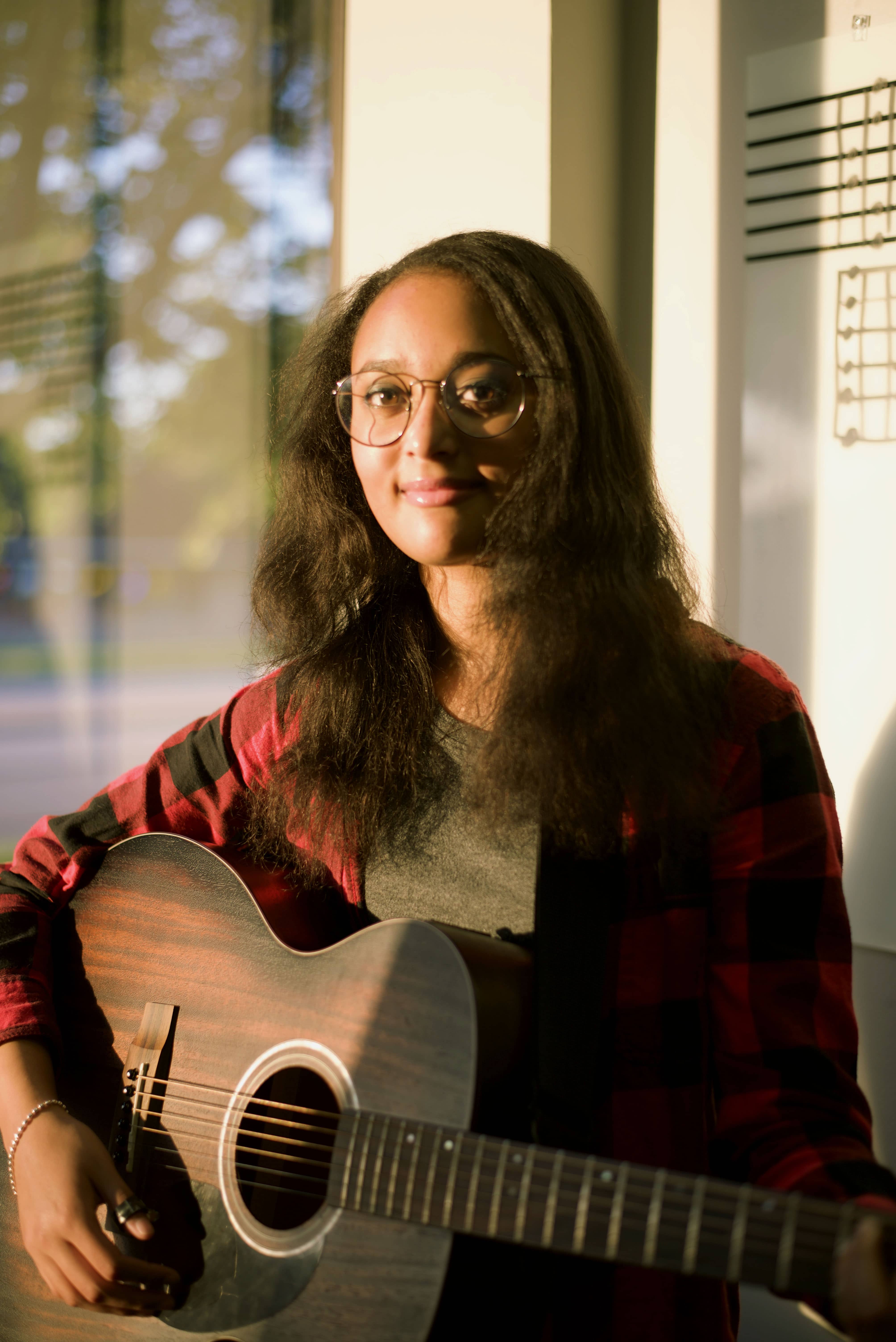 It’s a typical Thursday night at our Lenexa location. I’m sitting at the desk, the 7:40 band is kicking off their rehearsal, chatter from the lobby mixes in with the sound of drums from the studios, someone’s on the phone in the back office, the singer of the band is making a face at me through the auditorium window as her bandmates march in a circle with their guitars in the air. Through the noise and action, my Google chat notifies me that my attention is needed. The message is from one of our guitar teachers; his student had requested that I come back and listen to what they had been working on. I stand, rolling my office chair back, round the corner of the desk, and quickly head back to studio 8.

Caroline and her instructor greet me, and I take a spot cross-legged on the floor. Caroline has her acoustic guitar and her voice, and she begins to play. Her strums reach the corners of the room, her voice resonates, calm and full of emotion. The lyrics are about wanting to be with a person you love but knowing you’re not healthy enough to do so.

Caroline stops playing, “that’s all I’ve got so far”. My cheeks hurt from smiling, and my eyes are brimming with tears. “You’re 13, right? How do you know what any of this feels like?” Caroline replies, “I don’t know, I’ve heard enough love songs to know how it’s supposed to sound and feel.” Her ability to move people in this way is a testament to her empathy and furthered my intrigue in her process and music. I had the chance to sit down with Caroline and talk about her journey as a young musician and how she began songwriting.


What was your first instrument, and when did you start playing music?

Probably like 6 or 7. My mom signed me and my siblings up for piano lessons. So, we took that for a while. My teacher, she was really nice, and she got me into it. I just kind of slowly fell in love with it.

Do you think your teacher had a pretty big impact on your desire to continue piano?

Definitely. There is this one lesson that I can always remember in the back of my mind. I remember she gave me this piano piece and I worked really really hard on it because I wanted it to be perfect and then when I showed it to her she started crying because she said it was so beautiful. I think that was the real moment for me when I was like “this is what I want to do.”

In my very first lesson at Music House, my guitar teacher asked me to write a song... We talked about inspiration and he had met my dad that day, so we decided I’d write a song about my dad.


I think it’s cool that you were able to move someone in that way, and I don’t think you’ve stopped doing that with your music. So now you also do that with guitar and your voice, when did you pick up guitar and songwriting?

I’ve been at Music House maybe 3 or 4 or 5 years and I started piano with Charles Hoeft. Guitar is a more recent thing, I’ve always kind of wanted to play it because I always thought it was a cool instrument. I started maybe 2 years ago, picking it up by myself and then last year sometime during the pandemic I started guitar lessons at Music House and that’s when the true songwriting began. I’ve always attempted to write songs, I always thought it was an awesome thing that people could do, but I never felt like mine were good enough. I never showed anybody and I always thought that because of my age people would think “oh that’s nice” but never really take it too seriously.

I've recently watched a lot of interviews with a few different songwriters and many speak about their age. Most recently I listened to a Fiona Apple interview and she talked about writing songs at I think 12 or 13 and how it helped her process a lot of what she had been through. She mentioned how most people didn’t take her seriously because of that, but she continued because that was her outlet. She stuck with it and found confidence in it and had a very successful career, of course not without critique. So we sort of covered this, but I’m curious about when you started taking your songwriting seriously, or found more confidence in it?

In my very first lesson at Music House, my teacher asked me to write a song. First, it was just chords, and I asked if he wanted me to write lyrics with it and he was like, sure. We talked about inspiration and he had met my dad that day, so we decided I’d write a song about my dad. I kind of talk about all the things we do together. Like, Star Wars. He got me very attached to Star Wars, I actually use the word addicted. Anytime a Star Wars thing comes out it will be me, my dad, my brother, and my sister and we’ll go watch the movie or whatever. And that’s like, the actual first song I wrote.

...you have all of this emotion going on and you just feel like you can’t express it even in a song, and it feels overwhelming in a way... so I just play chords and search for the words.


That’s such a sweet story! That goes to show you can really write a song about anything, and I know that can be a bit overwhelming. Have you developed a process with your writing, and what's that process like?

Somehow it always ends up with me, sitting on my floor with either a guitar or my ukulele or setting out my keyboard and just mumbling random words until I find something that expresses some kind of feeling that’s going on in my life. I try to find chords, and it's weird in a way it seems like chords to me, you have the minor and the major chords it feels like they express a certain feeling to me. So, like if I’m writing happy songs sometimes it will be sad chords because it feels like they go together better or sad lyrics with happy chords and for some reason those go together really well.

What do you find yourself struggling with most when it comes to writing songs?

One of the things I struggle with is you have all of this emotion going on and you just feel like you can’t express it even in a song, and it feels overwhelming in a way. So I just play chords and search for the words, even reading a book helps. The character could be going through the same emotions and the author will tell you what they are feeling and it's the same thing. So you can write a song about that emotion.

It’s interesting that reading books helps you to understand your own emotions and we’ve talked before about the really big emotions and situations that you’re able to communicate with your writing at such a young age and I think that shows a lot of empathy from you. The fact that you are a reader demonstrates how reading can help us understand things that are beyond our first-hand experience.

Right, and it also helps when you’re attached to the characters as well because then you have more understanding of who they are and how and why they would be feeling it.

Do you ever write songs based on the characters' stories? For example, creating a song from their plot? Or do you use it more to help understand your own emotions?

Maybe occasionally I’ll try to come up with something about the characters, but in the end, I’m always basing it on how I’m feeling and reflecting on it.

There is one thing that I kind of want to say: I think one of the main struggles that I have sometimes with songwriting is accepting it. Does that make sense? Writing something and not being like “this is trash.” And being like this is never going to be good enough. That’s probably the one thing I struggle with and will probably always struggle with in a way.

Yes, that does make sense and I totally get that. The life of an artist! I’ll do a drawing or a painting and be like I hate this, let me cover it up entirely. It's the same way. I have a really hard time accepting what I’ve created and seeing it as something good, you can be your own worst critic.

Yeah, I feel like a lot of people struggle with it. My parents will be like I’m not good at this and they actually are and then I think about my songwriting and unfortunately, my advice could apply to me.

It could, exactly. And I think that's important to remember when you’re being so hard on yourself, but also being okay with the fact that you’re going to put stuff out there that may not be “great” and as long as you’re being your authentic self that makes it good enough. And sometimes you just have to do it, and put it out there and shut down that inner critic. And it's super hard to do, but it comes with time and with continuing the process.

Right and I showed my sister this one song that I made and she said it was good and I’m like, really that's your honest opinion. I asked her, like 5 times, is that your honest opinion, is that what you truly think? And she was like, "YES! It's good. TAKE THE COMPLIMENT!"

Don’t overly critique yourself. You’re probably never going to truly love it, but you have to at least accept it or you’re going to end up hating it by the end of the day.


I definitely relate to that! Again, sometimes you just have to put it out there, but it's nice to have your siblings on your side, that extra boost. Do you have any advice for people who are thinking of getting into songwriting? What would you say to them to help them get over the feelings of not knowing how to start or being scared to start?

Don’t overly critique yourself. You’re probably never going to truly love it, but you have to at least accept it or you’re going to end up hating it by the end of the day. And you get better over time. Even now, I look back at some of the songs that I’ve written after I’ve started writing and I’m like oh I wish I would have done this instead of that and I think you just have to understand that was then, this is now and you can get better. You now know what not to do and what to do.

Also, the basic foundation of songwriting, don’t rhyme the same words with the same words. For example, I’ll be listening to a song and they try to rhyme “you” with “you” and that makes me really upset!

Also, don’t overthink your lyrics! I’ve done that so many times and it gets you nowhere.

Who are some artists that you recommend?

Tate McRae. She probably posted a video online when she was like 13 and she wrote a love song about something she hadn’t experienced and that really motivated me to want to try to do that as well.


Caroline is currently taking both piano and guitar lessons at Music House and working on an EP that she hopes to release soon. Stay tuned for music from Caroline Spidle and in the meantime check out this playlist of music from other music house students!