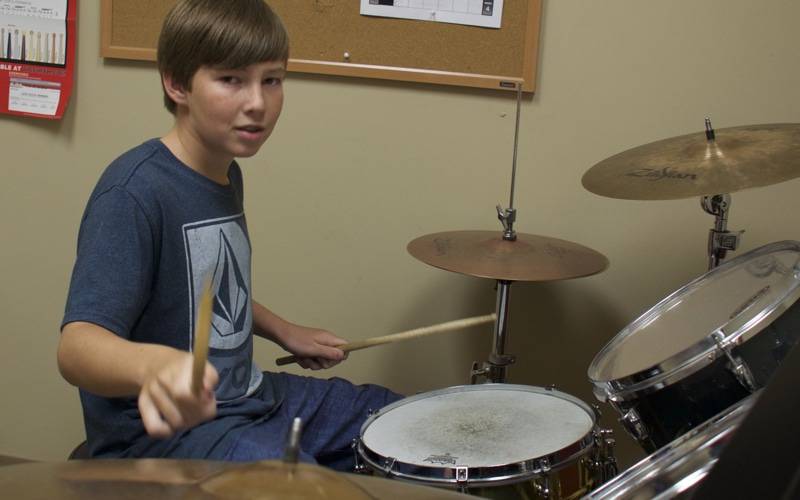 Do you ever dream about accomplishing something big? We all do from time to time. Does it also seem that most people never follow through on their dreams? They talk about them, but don't take even the first step toward accomplishing them. Too often that is the case, but not always. We all know someone who followed their dream, and accomplished what they set out to do, and we look at them with admiration.

Jay Babcock is a 13 year old drum student at Music House in Overland Park, Kansas. He has a dream and is working toward accomplishing it. He's not there yet, but the important thing is that he is taking steps to reach his goal.  Jay's dream is to get an endorsement from a music company by becoming a well known drummer on YouTube. To do that, he knows he will have to keep pushing his drum skills to a higher level, and learn how to make videos of his drumming that will draw viewers' attention.

When asked what sparked his interest in making drum videos and putting them on YouTube, he said he was inspired by Casey Cooper, who posts as "COOP3RDRUMM3R". Once he set the goal, he did a lot of online research, and got advice about technical issues he encountered, from his drum and band teachers at Music House, Steve Thomas and Josh Johnson. They also coached him to improve his drumming skills. Their advice was:

"Really listen to what you are playing, and play it over and over to get it just right."

Through his own initiative, Jay is becoming more experienced at making drum videos and trying to make each one better than the last. He is known as "Drummer J" on YouTube.

While he's on his way to becoming a YouTube sensation, Jay enjoys playing in his rock band at Music House. Of his experience there he says, "I love my teachers, I made friends, and I enjoy learning and performing music."

Now that Jay's taken steps toward reaching his goal, let's hope he sees his dream come true.  Go check out his videos, and become a subscriber so you can see his improvement over time.

Want to learn to play the drums or another instrument and follow your dreams? Visit our website at MusicHouseSchool.com.

Terri comes to Music House with extensive experience in business management. At Music House she spends her time working to make the client experience the best it can be.
Newest Stories
Related Stories
Tag List
Follow Your Dreams
Drum Lessons