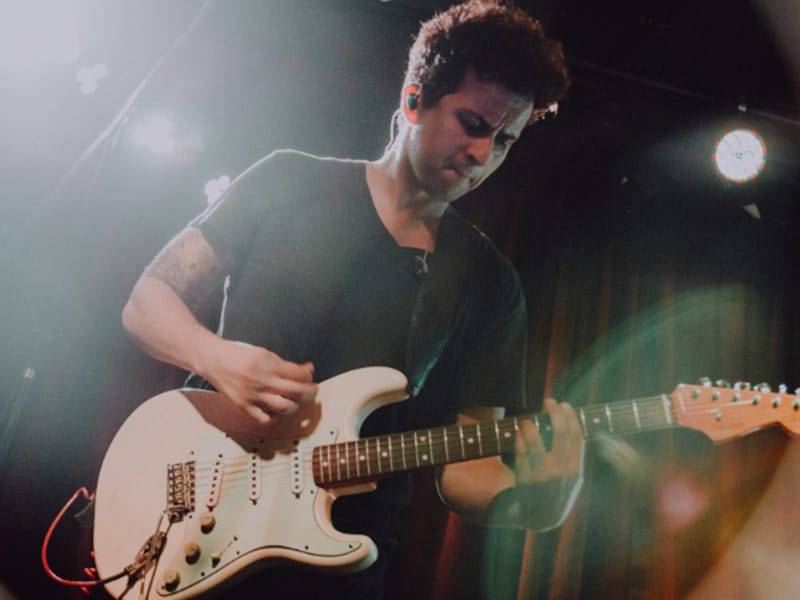 Guitar - Do I really need to explain?? LOL Guitar is the most expressive instrument. It's an instrument that has so many different approaches, methodologies, and ideas behind it. There are so many 'in-between' notes (listen to BB King), chord voicings, and instrument tunings that you could spend an entire lifetime discovering new things about the guitar.

Music has always been a part of my life and household growing up. My father (who played bass and trombone in the '60s) was deep into blues, rock, and classic rock music. My mother grew up listening to funk, R&B, and soul music. Although she never played any instruments, she has more sense of rhythm than anyone I know.

I had always felt a deep connection and appreciation for music. As a kid, you really can't explain the way certain things make you feel, but anytime "Thunderstruck" by AC/DC or "Shine" by Collective Soul came on (yes, I was a child of the '90s), my heart would start pumping, my foot would start tapping, and I would close my eyes to make sense of what I was feeling. I still to this day cannot explain that feeling...

My next-door neighbor had this plastic electric guitar that I became completely enamored with. In 1997, I asked for (and thankfully received) an acoustic guitar for Christmas but I did not start playing until 2000 (I was heavily involved in playing ice hockey throughout my childhood, so it did not allow much time for guitar or any other activities for that matter).

At one point, I remember my father had the acoustic guitar out and was playing this classic riff from Buddy Guy's (via Jonny Lang) track "Good Morning Little Schoolgirl". I was blown away that he was not only playing guitar (something brand new to me), but he was playing THAT lick (even though he figured it out in the wrong key lol- which I later discovered). My father explained to me the concept of "playing by ear". From that point, I began reading/playing finger exercises and a 12-Bar Blues Boogie tablature that I had received from one lesson I had taken 3 years prior. The rest is history. I still have and play on that acoustic guitar today :)

There are too many to recount and recall. Hahaha! I can say they all have one thing in common- you can play the same song, same solo, same setlist night after night, but how and when the music hits you is entirely different. Also, there is no such thing as the 'perfect show'. I have laid that idea to rest. The more I have grown to accept that, the more I have found and rediscovered my love for music.

I appreciate the core values Music House holds for its students and teachers. The feeling of watching/witnessing a student successfully set goals and challenges to better themselves AND reach those goals and overcome those challenges- that feeling is unmatched.

The best advice I can give is to set a schedule for practicing. Whether you have hours or only minutes to devote, you need to have an outline for what you are going to do. If you don't (and I am speaking from experience) outline it, you will usually end up 'noodling'. Not that noodling is necessarily a bad thing (it can be very resourceful for songwriting), noodling will only result in you playing what you already know. Then, you only refine reflexes and skills that are already optimally developed.

I would encourage every musician to always devote a certain amount of time to rudimentary playing and skills. Those skills never go out of style. Lacking in formal lessons during my formative years with guitar, I had/have discovered how important technique is to successful guitar playing. Guitar players- use a metronome. Guitarists are notorious for having a bad sense of timing and rhythm. Do not rely on a good drummer and/or bass player to keep time for you. Lastly, do not be afraid of making mistakes. If you are making mistakes, that means you are challenging yourself. Challenging your status quo.

Art is not about perfection. Art is about honesty. So, go make something.