Alex began tinkering with the guitar as soon as he could hold one up. His parents were set on him becoming a country music star and always had a nylon string acoustic around the home he grew up at in Springfield, Missouri. Things quickly changed however when Alex asked for his first electric guitar at 12 years old. The spurs were traded in for combat boots and power chords. Alex began to play punk and metal music leading him to start his first band at 16 years old.

Alex uses the lessons he has learned from the bands he toured with through the midwest throughout his teenage and adult years to help guitarists realize their potential. As a performance-based writer, Alex believes in keeping music as fun and electrifying for his students as it has always been to him. Alex implements knowledge from folk-country to metal guitar to relate to all levels of playing regardless of the genre. After all, music is the great communicator; no matter where we are in life, we are all already musicians.

Alex continues to perform in the Kansas City area. He also creates lo-fi-esque beats under his solo name for filmmakers and twitch streamers alike. To Alex, musical study is an endless journey and he continues to hone his craft, both as a teacher and a performer. 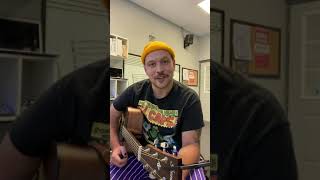